Taco Bell Tuesday grew to be much bigger (as in, more people showed up) as the semester wore on, and in the years hence it became Taco Bell Tuesday on Friday because we were just that cool. Anyway, while I don’t eat TB very often any more, it holds a very special place in my heart.

While I was perusing Pinterest a few years ago, I saw a copycat recipe for the Crunchwrap Supreme. And I immediately made it, and since then we’ve made it multiple times, most often with chicken. This time we made it with beef, and I forgot how good it was. We didn’t even try to strictly follow Taco Bell’s recipe: we used real meat 😉 and added avocado. 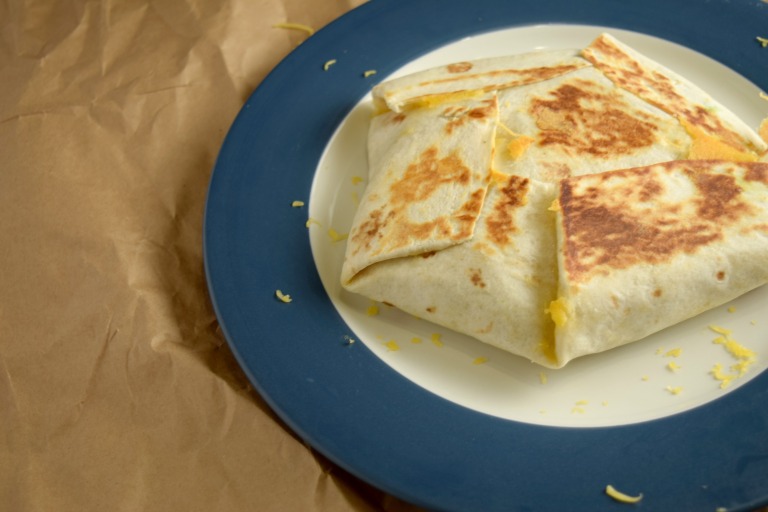 In a skillet, heat the beef on medium heat until there is no pink.

Add the water and spices and continue heating until the water is gone.

Cut one tortilla into fourths. Set aside.

Layer 1/2 C beef, lettuce, tomato, avocado, sour cream, cheese, tortilla chips, and more cheese on each of the four whole tortillas. Keep everything in the middle of the tortilla, leaving about three inches or more of a boundary around the outside of the tortilla.

Take one fourth of the split tortillas, and layer it on top.

Then fold the outside of the tortilla in around the edges. Use cheese underneath so that when is heated, it will be sealed shut.

Put a spatula over the crunchwrap so it doesn’t unfold.

Slide the spatula out from underneath the crunchwrap into a hot frying pan (on medium).